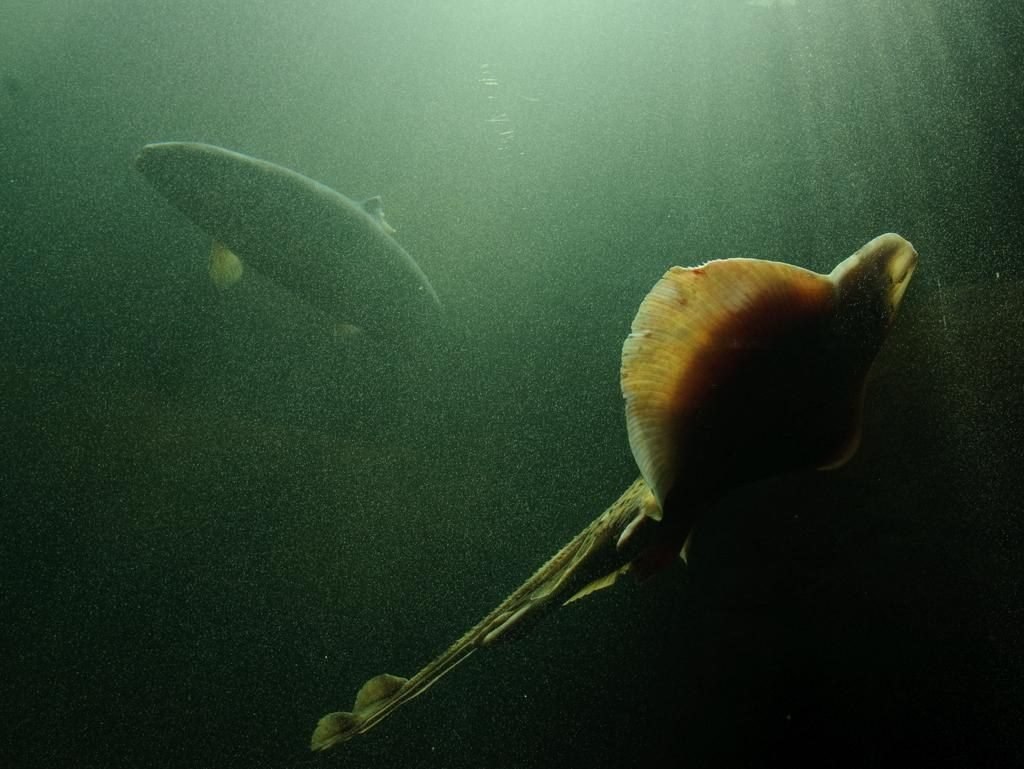 Hello all!
Spent some time at the newly opened Fundy Discovery Aquarium in St. Andrews, thought I’d pass on some info on getting great shots of the new exhibits! For the month of September, the admission is half price as all exhibits aren’t complete yet.

WHEN TO GO
First off, to get the most shooting opportunities, you must go when it’s sunny outside. The tanks are on the sides of the building, and the water cuts a lot of light out. If it’s overcast, there won’t be enough light to get shots.
I would suggest going sometime between 11am-1pm. That way the sun will be high in the sky shining right down.

The problem is that the light is not bright enough to shoot handheld. So you have two options-tripod, or using flash.

If you are going to use the tripod, the Skates are out. They are moving around too much to get a sharp picture. The touch pool however would be fine. I would suggest using a polarizer to remove glare from the surface of the water. You’ll have to shoot completely still objects however.

The BETTER method is to use flash. However, there is one problem with flash… 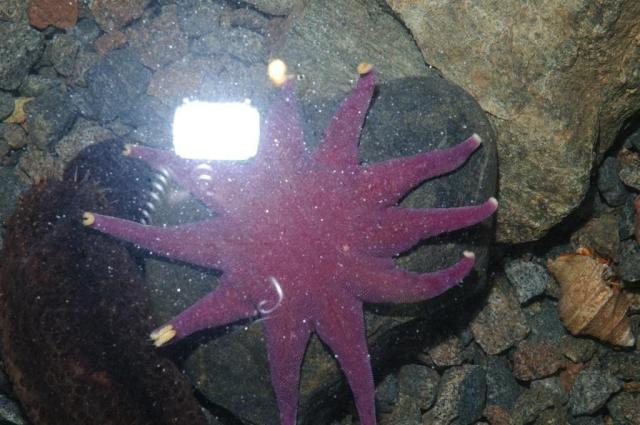 Yep, pretty harsh.Not to mention if you shoot from directly above, the flash will reflect back at the camera. Not pretty.

To fix this, you want to use the flash off-camera, either through a off camera flash cord, or trigger your flash wireless.
Just compare the difference: Images on the left are done with direct flash, the right are done using the off-camera flash cord.

Off camera flash cords are about $100 or so. Buy one.
If you have a pop-up flash, you’ll have to try to avoid shooting directly from above to avoid the reflection…but you’ll still get the glare.

I used MANUAL mode on my flash, but you could also use TTL. You may need to use the flash exposure compensation and turn it up a bit as the water will cut the light.

CAMERA SETTINGS WHEN USING FLASH
ISO-400. You will be using the flash to light the tank

SHUTTER SPEED-You can use your highest sync speed (usually 1/200th of a second or slower) to ensure anything that is moving won’t give you a bit of blur.

APERTURE-Since you are close to the objects, and your flash is close, you can use F11/F16 to get lots of depth of field.

SHOOTING THE SKATE POOL
Skates are really awesome…they will actually come up to the surface to greet you and allow you to touch them on top, and below!
Shoot with the same flash techniques as above. 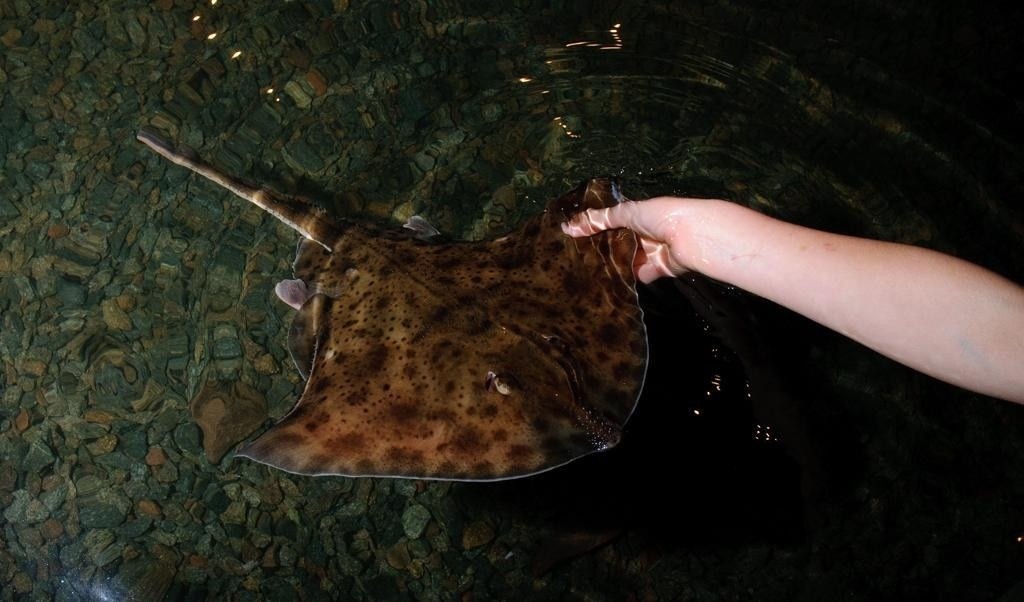 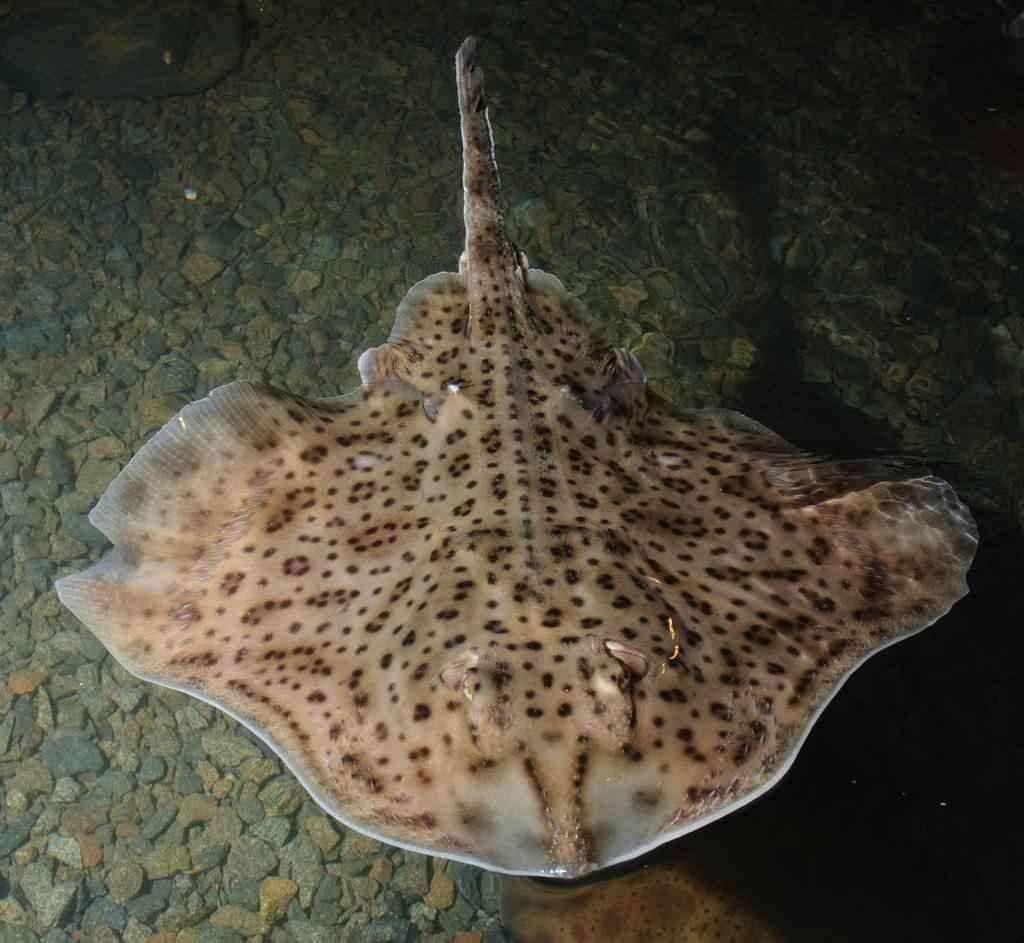 SETTINGS FOR SHOOTING THE LARGE FISH TANKS
You should use MANUAL(M) shooting mode, because every other mode is just going to blow the exposure because of the darkness of the water.

SHUTTER SPEED-The occupants of the tank don’t swim too fast, so 1/250th of a second will be fine to freeze them.

APERTURE-Pretty well you’ll just have to try an aperture and shoot until the exposure looks good. Because of all the dark water, the meter’s going to give you the wrong exposure.
F8 worked great for me. But the exposure will change based on the light. Both photos below were taken at the same exposure, 1/250th at F8. 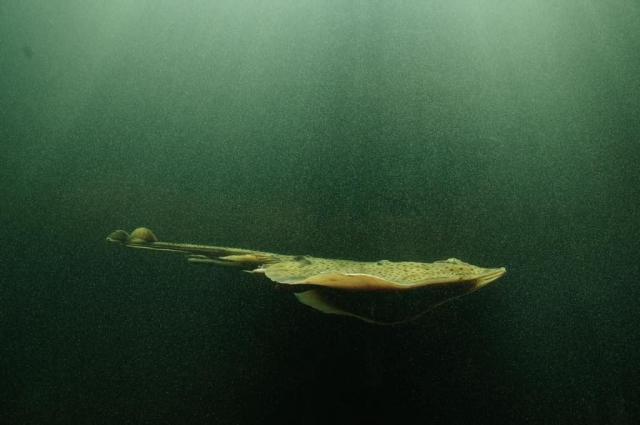 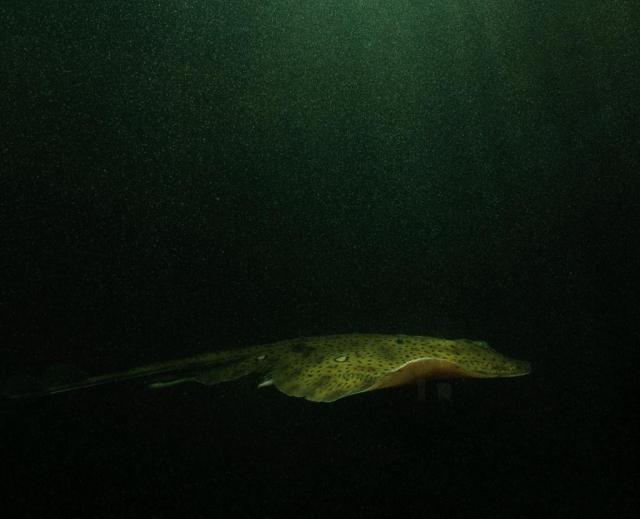 I personally preferred the darker light! 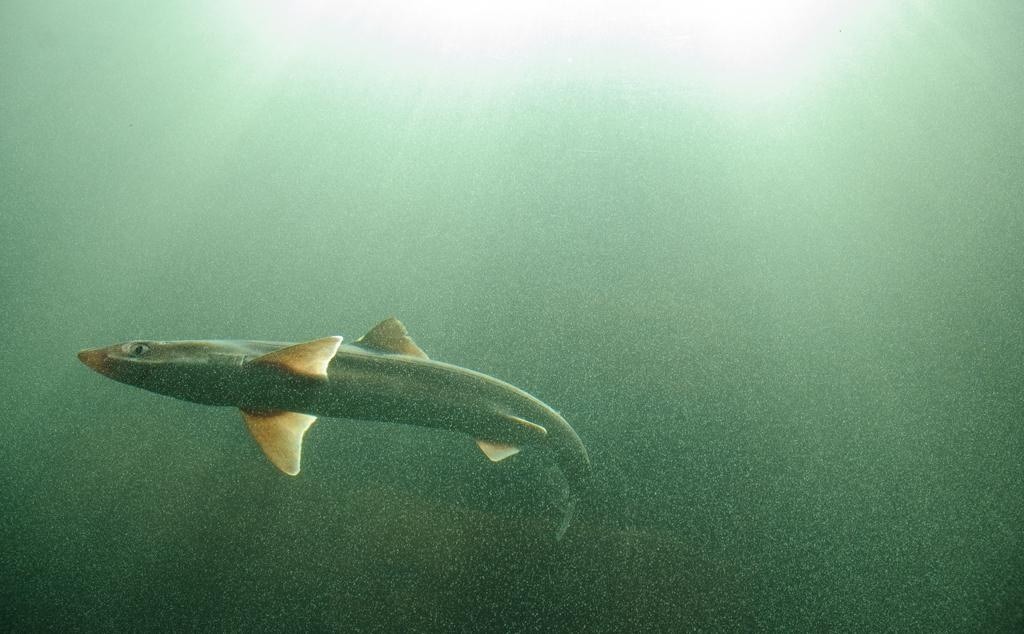 You can also use the interior window as a nice framing element. 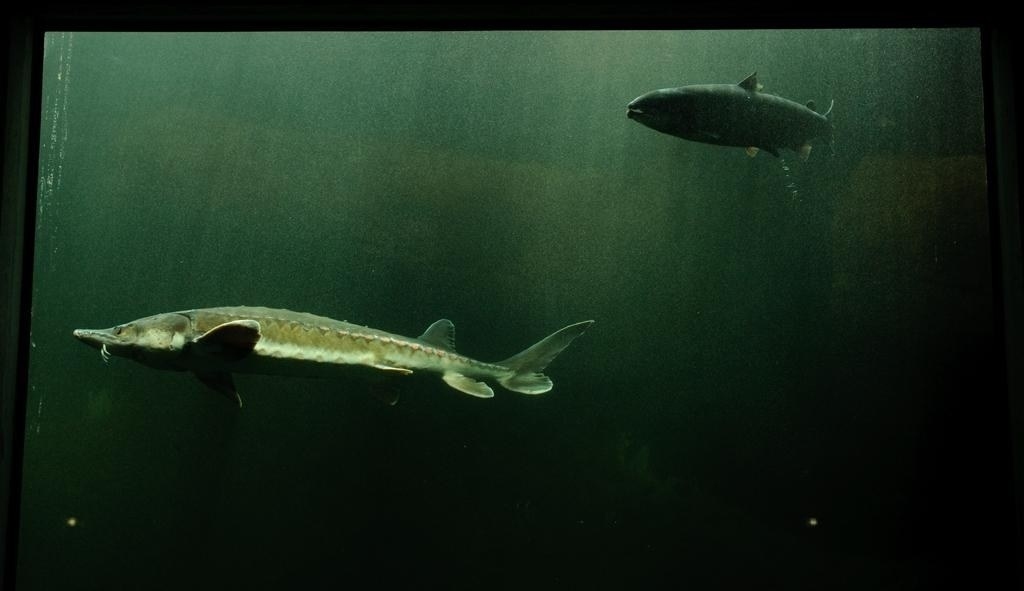 You can also try some nice close ups too! 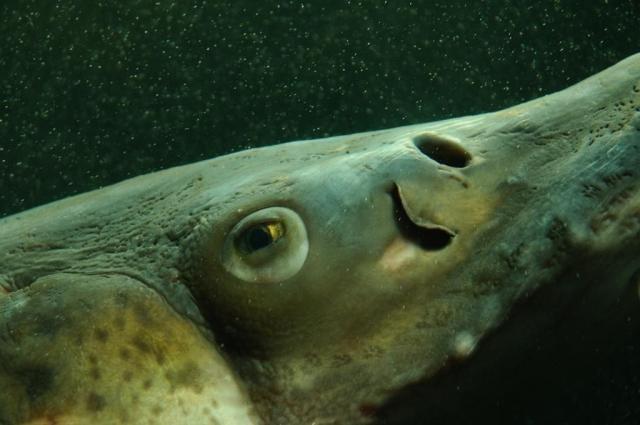 WHITE BALANCE
The water filters the sunlight, giving it a very green cast. I used DAYLIGHT(SUN) balance, because I didn’t mind the cast. To me, it says “underwater”
Since I was shooting RAW however, I knew I would be able to adjust this later if I didn’t like the results.
To to see what the images would look like, in Camera Raw I tried a few different balances. Basically none of the presets gave me anything nicer…so I tried AUTO, and voila! The image on the left is with DAYLIGHT, the one on the right is AUTO (5750 temperature, +30 magenta). While it shows the color the skate would be out of water, it doesn’t show how it looked to my eye. 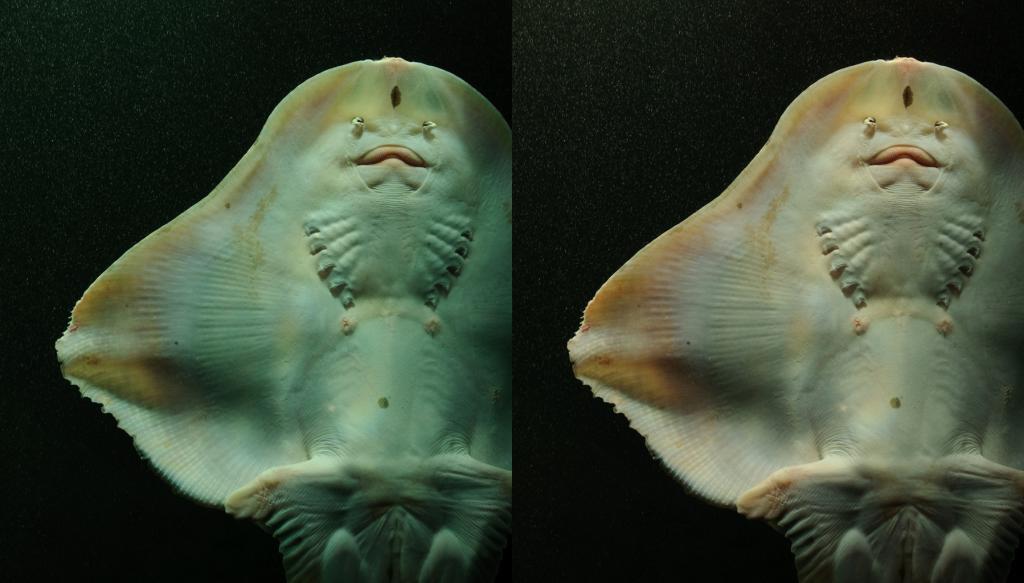 WHAT ABOUT FLASH?
Flash is not going to work very well, as it will reflect back at the camera. My only suggestion is to try to put the camera lens right on the glass, that way it’s less likely to reflect. I tried some shots with the flash off-camera, but the light just reflected everywhere.
Flash can be used however to get a good photo of your family in front of one of the tanks…use the same shutter speed/aperture as above, then pop up the flash. To avoid the glare off the back, I put my tall daughter in the middle!

just watch out for… 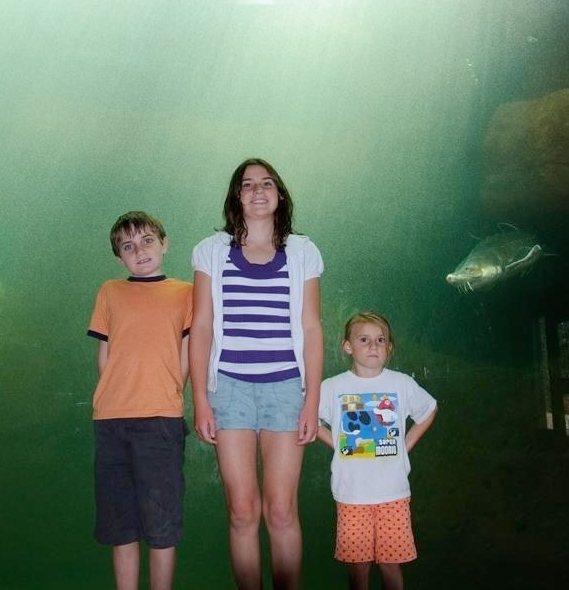 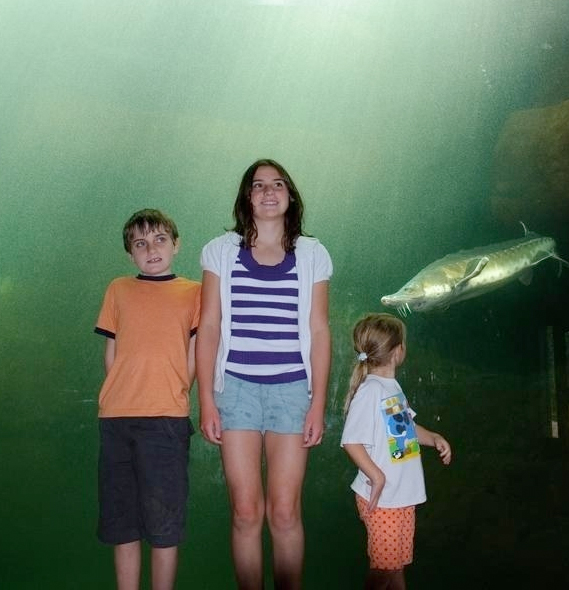 THE OTHER TANKS
Most of the other tanks are very poorly lit…with the non-moving life like the lobsters, you could try shooting on tripod. I tried some shots with off-camera flash, but the light just bounced everywhere. You can try putting the lens right up to the glass, but the results I was getting was disappointing.

WHAT ABOUT THE SEALS?
Well…i personally don’t really like the new set up for the seals from a photography standpoint.. It’s great to be able to see them under the water, no question…but it’s really hard to photograph. I’m not sure if the sun shines down into that side tank…if it does, you will get the same light as above. It might happen more in the morning. The above viewing area doesn’t give you the same view as the previous one…it might be that the seals can swim underwater more now so they do…I don’t really know.

So if you get a chance, head down to St. Andrews and check out the new Fundy Discovery Aquarium!