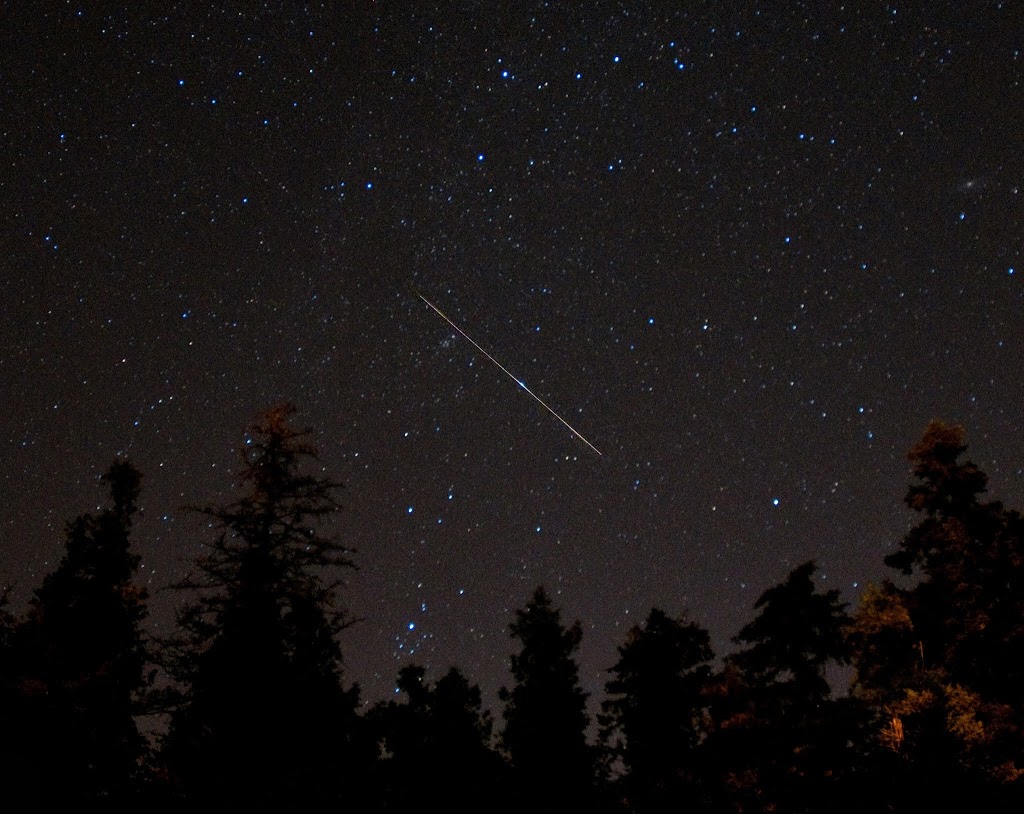 The annual Orionid Meteor Shower is peaking in the evening of October 21st-22nd! Not the busiest shower, with usually 25 meteors an hour! But still a good opportunity,  so get out your tripods, get a cup of coffee, and go photograph them! Here’s some tips on how!

Pre-Shooting Preparation:
Charge your batteries fully before going out. It might be a bit colder at night, and that can affect battery life. Wear some warm clothes, a hat, and gloves. Bring some hot beverages, some friends, and make it a fun outing! At least you’ll have someone to talk to between exposures. Might also want a chair to rest as you shoot.
Also bring a flashlight or LED keychain light so you can see what you are doing when changing your settings. A headlight looks dorky, but it let’s you works with both hands.

Where and When to Go and Sky Conditions:
The meteor shower will peak on the night of October 21st and into the early hours of October 22nd. The moon will be out, but it’s a waning crescent so not too bright. The meteors will be visible after midnight, but the best time will be in the pre-dawn hours.
You want to be as far away from the City/Town as possible to reduce the amount of light pollution.
Find a dark road out in the country somewhere far away from street lights.
Obviously it has to be a clear night that you can see the sky.

Finding Orion:
Orion is one of the easiest constellations to find(it’s the three stars close together that form the belt of Orion). At the time you are going out, it should be in the Southern part of the sky. Another great way to find the constellations is using an app like Sky View or Sky Guide.

Do I Need A Tripod?
YES and the heavier the better!

Has to be MANUAL as you need to set the shutter speed and aperture.

Shutter Speeds:
The longer the speed you use, the more meteors you will get. However, if you go too long, the stars will begin to form trails. To figure out how to long to shoot the stars without getting trails, you can use this general guide.
Divide 600 by the length of your lens, and that is how many seconds you should use. For example, if you are using a 17mm lens, 600/17mm= 35 seconds.

Do a test photo, and see if the stars blur. If they do, your exposure is too long.

However, if you do long exposures like 30minutes to 1 hour(or longer), you will get star trails that look neat along with the straight lines of meteors. The photo below was done for three hours using a film camera(although you can see the light pollution made the sky brownish instead of black!) Note you will need a cable release or remote, and use BULB mode to do this. No way you can hold the button down for that long…

NOTE: Many digital cameras will max out the shutter length at 30 minutes to prevent overheating and damage..most likely that will be the longest you can do.

Aperture:
Use your widest aperture (smaller number, for example 3.5/4.5) to let in as much light as possible. If you find the meteors coming out a bit bright, you can stop down one setting. If you have a lens that has a really wide aperture(1.8/2.8) that is even better!

Meter:
Forget the meter. It will be waaaaay in the minus, that is fine. The camera can’t meter properly for the meteors, just use the settings above.

White Balance:
I would suggest shooting RAW, and then playing with the white balance if needed.
If you are shooting JPEG, do a test using DAYLIGHT/FULL SUN and see how it looks. If you do have things lit up by ambient light around you(like street lights, etc) you may want to use TUNGSTEN/INCANDESCENT instead, but it could make the sky go a bit too blue.

Combining Shots:
-It’s possible to combine the images of separate meteors into one image using Photoshop. The difficulty is the position of the stars will change as the Earth rotates, so you’ll need to find star clusters that you can use to line the shots up.

Other Shooting Tips:
-If you want to include trees, mountains, the horizon, etc they will provide an interesting silhouette shape and scale. So go out there, have some fun!