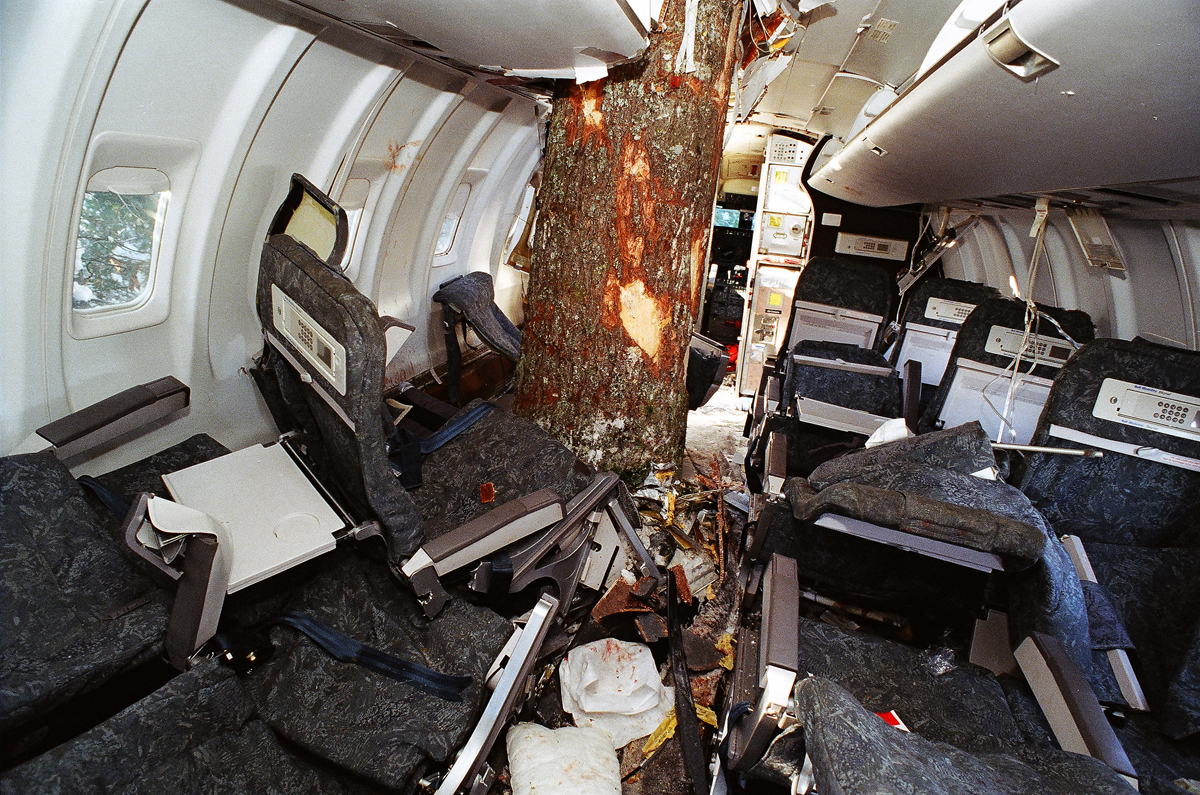 Hard to belive how fast time flies. It has been 25 years now since I took this photograph, which basically led to my almost two-decade career at the Telegraph-Journal. I’ve told the story behind the photograph more than a few times, but never put it down on here.

Air Canada Flight 646 crashed into the woods near the Fredericton Airport on a foggy December night in 1997.  I was freelancing for the Telegraph Journal at the time, and was called to go up to the hospital to shoot the injured coming in (the staff photographer from Saint John was sent to the airport).  Amazingly, no one died and thankfully there were only a few that were seriously injured.

The next day, the head investigators from the National Transportation Safety Board arrived to investigate the plane, and I was sent to cover it.

As you can imagine, it was a zoo, with dozens of radio, TV and print media. And not just local, but national media, as the plane had come from Toronto. They put us all in vans and drove us out to the crash site. We got shots of the investigators looking around, poking and prodding the plane, but what we all really wanted was shots inside the plane.  As it went down, it crashed into a large tree that tore through the fuselage and ended up in the middle of the plane. That of course would be the most dramatic image.

They decided to allow one videographer and one photographer in to record video and images, in what is referred to as a “pool” situation. The video and film would be shared with all media. There were three photographers there that day: myself, a photographer from the Toronto Sun, and Steve MacGillivray from the city paper, the Daily Gleaner. The Sun guy volunteered to go in. As the “rookie” of the three, I wasn’t going to argue. He said he shoot as much as possible, and would leave a negative at a local photo lab for us later.

Being the first (and hopefully only) plane crash I’d photographed, I continued to shoot the site.  After I while I noticed that most of the media had left and gone back to the vans to take us back to the airpot. I thought…what the heck and decided to try to get in the plane.

I went up to the TSB coordinator, and said that the photographer that went in was with Canadian Press (which was technically a lie, since he was with the Toronto Sun), and that we didn’t get Canadian Press (which wasn’t a lie, at the time we didn’t subscribe), so we couldn’t get the photo and asked if I could get in for a quick shot.  He hummed and hawed about it being slippery and sharp, they’d already done the pool shooting, and said he couldn’t do it.  I said thanks anyway and resumed shooting.

A few minutes later I looked up and realized it was just me and a Safety Board photographer left at the site. I thought I’d try one last time, and said the same thing to him.  He looked down the hill, saw that no one was looking, and said OK, I’ll give you two mintues.  He took me inside, and I banged off as many frames as I could. Then he said “Ok, we gotat go.: We left and I jumped in the back of the van full of glee at my success, telling anyone who would listen about how I got the photo.

It turned out that if I hadn’t of done that, I (and the newspaper) would have been screwed!

Remember that nice photographer from the Sun who was going to give us a negative?  I was told that he had called his editor in Toronto, and was told not to release the image until after 9:00 PM, so the Toronto Star wouldn’t have it.  That was fine for the Gleaner, because they print the next day, but it would have been way too late for the Telegraph. At 9pm I would not have had time to get back to the office, SCAN the negative, and send it over the phone line. Canadian Press was flipping out as well, because they really wanted the shot and couldn’t get it from the Gleaner until later.

The next day, the Telegraph ran my photo across six columns on the front. It was also picked up by the Ottawa Citizen and the Toronto Star, so at least the Sun didn’t get the exclusive they wanted.

The photo ended up getting nominated for my first Atlantic Journalism Award, and not long after that I was hired on as the staff photographer for the Telegraph Journal.

I honestly don’t know where I’d be today if I hadn’t gotten myself into that plane.
Would I have eventually been hired anyway? Would I be teaching?
If there are alternate realities, there is one where I didn’t do what it took to get that photo. Guess we’ll never know…

And I’m going to remembered for any photograph that I have taken, this might be one of them. Along with my photo of a New Brunswicker’s reaction to meeting the Queen. Another photo which I really should have written about after she died. Coming soon.

Side note: In 2008, we did an exhibition of work by the Telegraph-Journal photographers at the Saint John Arts Centre.
This image was printed 4×6 feet for that show, and was impressive to see on the wall.
Then it lived in my basement for a while, and I then brought it to the College to put on display for a bit.

Currently it’s on display at River Valley Middle School in Grand Bay-Westfield, where it is used to inspire students to write stories…and maybe become interested in photography?