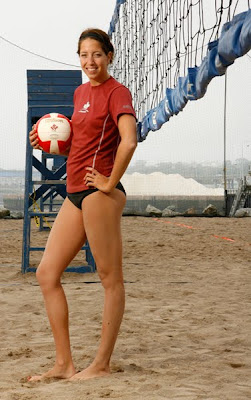 Today’s athlete portrait is of Canada Games women’s beach volleyball player Jill Blanchard. This was the final shoot done for the series, and it was a great way to end it.

Before you get too exciting, you won’t see the normal photographs that get taken with women’s beach volleyball. If you don’t know what I mean, just type “beach volleyball” in Google images.

Again had the idea to have the subject flying through the air, diving for the ball, ball in perfect position, subject looking at the camera, but logistically, couldn’t make it work. I had my assistant Tanner tossing the ball and Jill diving for it, but it just wasn’t coming out. 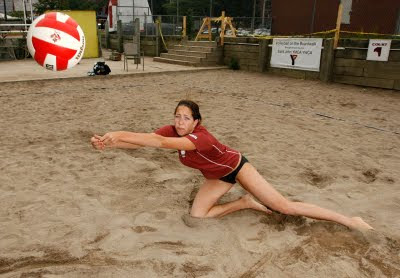 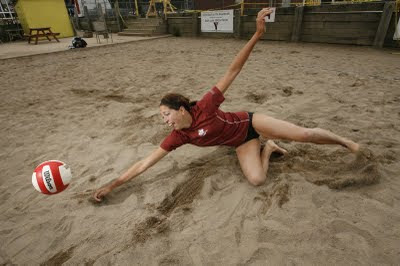 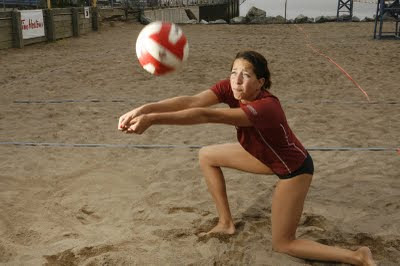 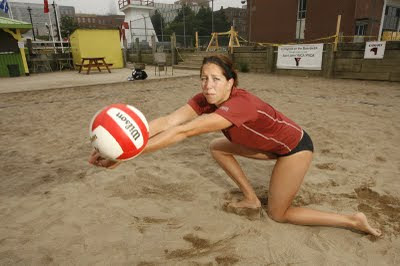 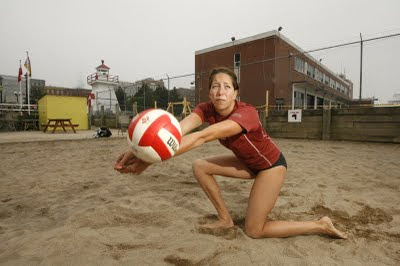 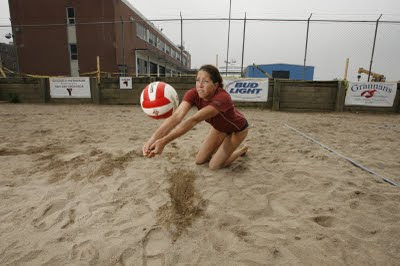 So I decided to do some portraits at the net. Again, set up so the subject is backlit by the bright background, and filling them in with the flash. 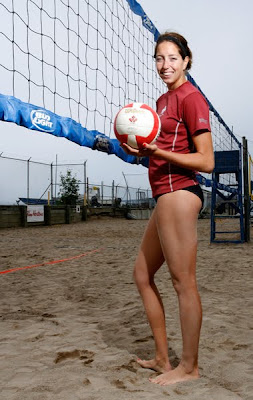 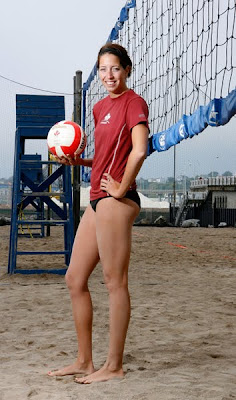 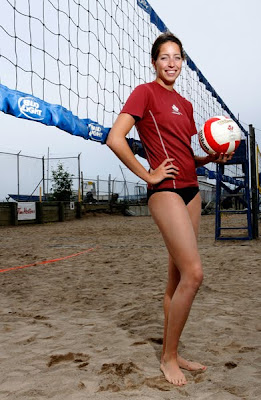 Of course there were a few of the old toss the ball up trick too! 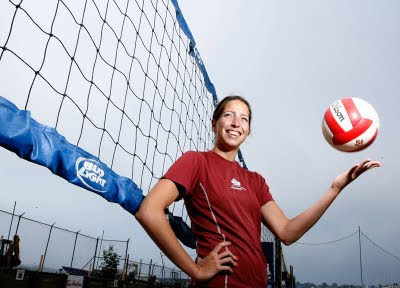 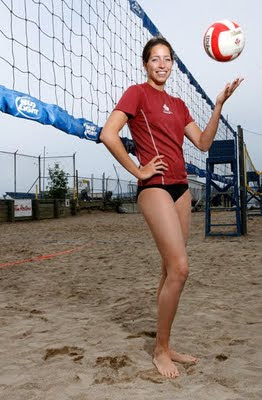 I found the light a bit cool and wanted that sunny beach look, so I set the WHITE BALANCE to CLOUDY/OVERCAST, which added a bit of warmth to the image. 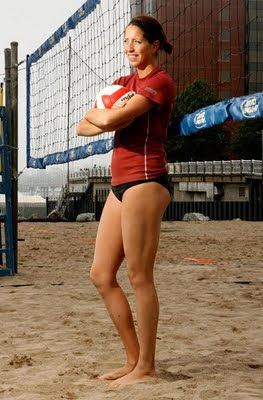 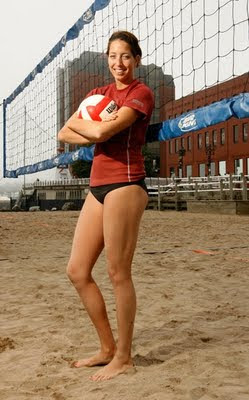 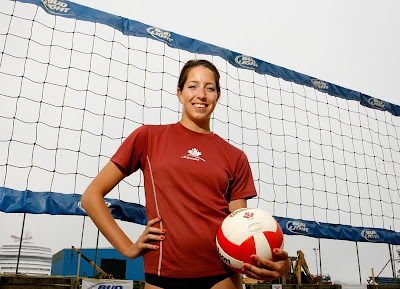 Looking the images aftewards, I really liked this composition below, but wished I had of moved the light so it was more on Jill’s face and not so side lit. 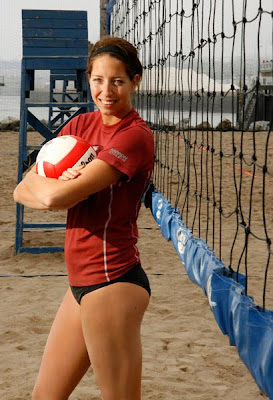 Tried a few set-ups framing Jill with the net. One of the issues with the location at Market Square is in one direction, the background had the lovely bouys on the Coast Guard site, and the other direction is Market Square. 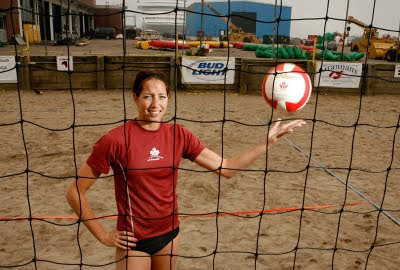 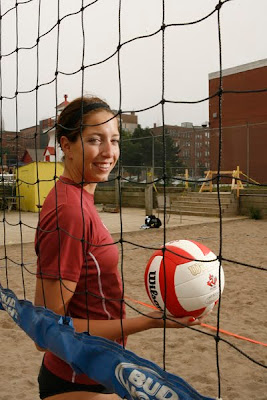 Also tried some shots of Jill bumping the ball. To get high up, I climbed onto the referee chair. To get the ball in the right spot I tried getting Tanner to throw it to her, but it was just as easy for me to drop it from my perch. 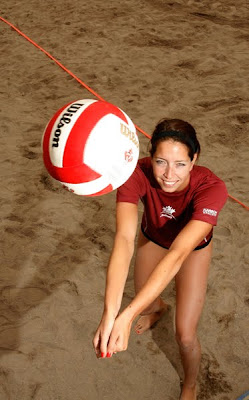 Then I decided to try some portraits having Jill sitting on the sand. 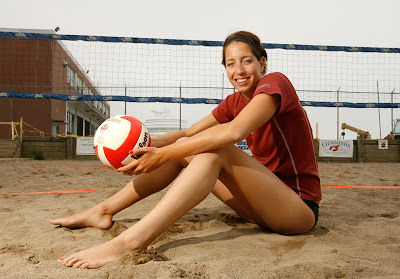 Then I asked Jill to lay on the sand, and rest on the ball. I also got low, laying on the sand to get a better angle. By getting low, it minimized the distracting backgrounds with the Coast Guard site. 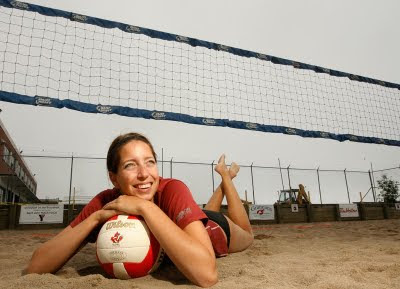 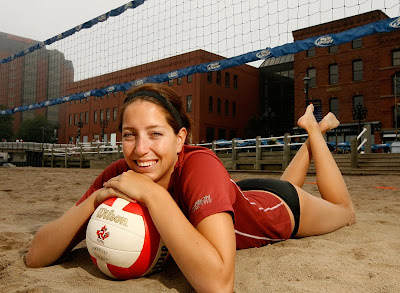 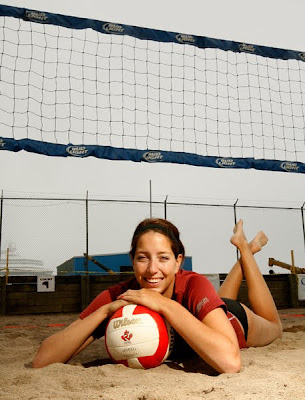 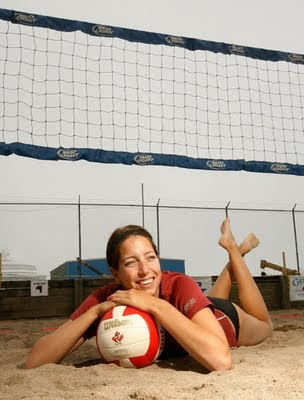 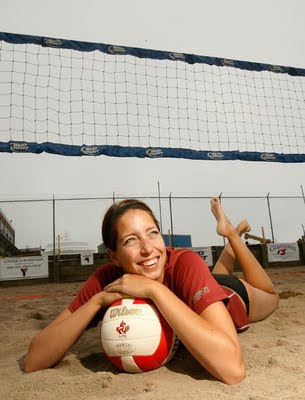 To see more in this series, head to my Canada Games Athlete Galleries on my site that contains more images from this shoot.
To see the full series of posts in the Canada Games Series, click here.
That is it for the athlete portraits, but there is one shoot left, chef-de-mission Jennifer Bent-Richard. It’s a cool one!